The project was part of a larger project, which aimed to support recovery of claims ...

The project was part of a larger project, which was aimed to support recovery of claims. Our task was to solve the division of claims into segments and control their recovery. The actual control is implemented by creating actions associated with the claim. The actions are either automatic or solved by the user.

The Claim Management System (SRP) is solved in Oracle database. Here is the logical core that is responsible for all the activity. GUI is designed as a J2EE application that runs on WebLogic Server. The basis of the application is ORDO 2.0 platform.

The claim data are imported into SRP from the source databases (RSZP). The SRP task is to divide the data into segments. Each segment is associated with a particular process - a sequence of actions to be performed with the claim. SRP sends planned actions to the target application. It is responsible for their execution, either automatic (SMS, letters), or manual (forwarding the action to the particular user). It passes the results of actions back into SRP along with the claim data. 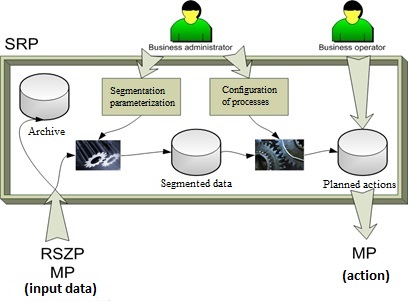 The SRP user interface has two levels: claim data and definitions. The first one shows the data of claims and actions which have already been carried out and their results. This part of the user interface is read-only. It does not make sense for the user to require any changes there.

The second part of the user interface is intended to create definitions. According to these definitions: